Donate
Who we are
Aims and objectives
SRB
Who we are

Histiocytosis UK now and in the future

Since the successful launch of the campaign in Sept 2014, Histiocytosis UK has been growing:

The network of Clinical Champions in each of the medical centres around the UK are encouraging fellow health professionals regarding the project.

Histiocytosis UK has joined the international campaign for the promotion of the disease by taking part in Histiocytosis Awareness Month each September.

We are growing a network of volunteers around the country who are distributing awareness information to their local schools, GP surgeries and hospital waiting rooms.

With the increased publicity and spreading of the Histio UK message by word of mouth, the number of volunteer distributors is growing. These volunteers are enthusiastic and passionate due to their personal, family or friends experience with histiocytosis.

The future of Histio UK
Following the successful launch of Histio UK, it is critical that we build on the momentum of this vital project.

We are intending to do this in a number of ways:-
Creation of information and raising awareness leading to knowledge transfer
Continuing to publicise Histio UK at health professionals’ conferences and journals, in popular magazines and websites, and also on Facebook and Twitter

And in particular
Marshalling our growing number of volunteers into a more cohesive force and recruiting, over the next year, 100 Histio Champions around the country to complement the work of the Clinical Champions already in place.

The Histio Champions will be responsible for spreading the Histio UK message around their local community. We will support the champions in distributing symptom cards and campaign information in the most appropriate places within their communities, such as GP surgeries; in giving talks to schools and nurseries etc.; hosting stands at shopping centres; holding awareness-raising events such as tea-parties, and publicising what they are doing via the media, or through relevant networks, such as child-minders. Their aim will be to get the message to as many parents, young people and health professionals as possible.

Paul Kontoyannis, Chair
Paul established The Histiocytosis Research Trust with Dr Jon Pritchard in 1991. The two men met in 1982 when Paul took his 40-day old son, Nikolas, to Great Ormond Street Hospital. Nikolas was diagnosed with multi-system LCH and given only a 30% chance of survival.

After embarking on a number of treatments, Nikolas survived against the odds and despite having some ‘late effects’ of the disease, remains, together with his family, determined to raise awareness of histiocytosis and encourage scientists and clinicians to keep researching the disease. The family hope there will one day be a cure.

Professor Peter Beverley, Vice-Chair
Peter trained as a physician but carries out research in immunology. His research focuses on understanding immunological memory and how the properties of memory cells contribute to protective immunity and disease pathogenesis. He trained at the National Institute for Medical Research in London and after postdoctoral work at Sloan Kettering Institute in New York, joined the Imperial Cancer Research Fund Tumour Immunology Unit in 1973, becoming Director in 1992. From 1995-2005 he was the Scientific Head of the Edward Jenner Institute for Vaccine Research at Compton in Berkshire and subsequently worked on immunity to tuberculosis at Oxford University until 2014. He is currently a Visiting Professor at Imperial College London. He has published over 200 papers in refereed journals and served on committees of the Medical Research Council, the Wellcome Trust, several other UK medical charities and international bodies. He has been involved with the Nikolas Symposia on the Histiocytoses as organiser and advisor since 1989 and has been a Trustee of the Histocytosis Research Trust, now Histiocytosis UK, since its inception. He was elected a Fellow of the Society of Biology in 2003 and the Academy of Medical Science in 2003.

Statement of Interests
As Trustee I have been particularly interested in ensuring that funds raised in the UK and elsewhere for research into Histiocytoses have been spent as effectively as possible. To this end I recruited and chaired an International Scientific Review Board of distinguished scientists, including the Nobel prizewinner, Prof Ralph Steinman, to review applications to the Trust for funding. Although I have stepped down from chairing the Review Board, I remain concerned to ensure that funds raised should be spent as effectively as possible both to further research into Histiocytoses and to promote the well being of patients and families. In the case of Langerhans Cell Histiocytosis the discovery of the BRAF V600E mutation suggests that the focus of efforts for this disease should now be to exploit this discovery for the benefit of patients either as a diagnostic and prognostic tool or as a target for novel therapies. For Haemophagocytic Lymphohistiocytosis, gene therapy is likely to become possible eventually and should if possible be supported.

Professor Matthew Collin, Chair Scientific Review Board
Graduated from Oxford University Medical School in 1995, having obtained a DPhil in Immunology in 1992. Completed specialist training in Haematology and Transplantation in Newcastle in 2004 and was appointed as a Consultant Haematologist in 2006.

He has followed a combined clinical and research career initially funded by Leukaemia and Lymphoma Research through a Clinician Scientist award (2002) and Bennett Senior Fellowship in Experimental Haematology (2006). Since 2006 he has been a Clinical Senior Lecturer at Newcastle University. He became Professor of Haematology and Director of Adult Bone Marrow Transplantation in 2010.

Matt said “At the Northern Centre for Bone Marrow Transplantation we work to deliver a state of the art service, providing about 150 transplants each year to patients from across the region. My research focuses on dendritic cells, a type of white blood cell critical for the initiation of immune responses including those that occur during transplantation. I also look after and study patients with dendritic cell diseases such as Langerhans Cell Histiocytosis and dendritic cell deficiency”.

Peter Bienenstock
As a baby, Peter’s daughter, Lea was diagnosed with multi-system LCH and also developed haemophagocytic syndrome. After a year of chemotherapy, there was little hope but doctors at the Nikolas Symposium in Greece developed a salvage therapy which was successful. Within weeks, Lea had left hospital. Now a healthy 13-year-old, Peter believes Lea’s story shows the value of working together to find treatments and ultimately a cure for all histiocytosis patients.

Dr Vasanta Nanduri
Consultant Paediatrician Dr Nanduri is an expert in both paediatric LCH and HLH as well as other histiocytic disorders. She is based at Watford General Hospital. 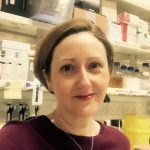 Our Scientific Review Board SRB

Dedicated to promoting scientific research to uncover the causes of histiocytic diseases and ensure early diagnosis, effective treatment and a cure.

In 1981, Dr. Pritchard met the Kontoyannis family after their son Nikolas was diagnosed with multi-system LCH. He suggested to Nikolas’s father Paul that the best way to seek a cure for LCH would be to organise a meeting where scientists and clinicians could get together to discuss the disease. The first Nikolas Symposium was held in 1989 in Cambridge and has been organised annually ever since. Following on from this first meeting, Dr. Pritchard suggested that a charity should be set up to raise money to fund research into the disease and The Histiocytosis Research Trust was born in 1991.

Dr. Pritchard is remembered as being an outstanding individual who contributed and worked tirelessly for the causes he strongly believed in. He was very energetic, endearing, intelligent, cheerful and reassuring. He led the way and supported both The Trust and The Nikolas Symposium in their efforts to search for a cure for LCH. He provided unrelenting support to all his patients and their families and will never be forgotten by the many he helped. He is remembered for bringing a smile to every ill child as well providing strength and hope.

In 2014 the Histiocytosis Research Trust merged it activities with Histiocytosis UK. Our aims to provide information support to patients and their families and raise public and professional awareness of histiocytic disorders.

If you are interested in becoming a Histio UK Champion or Histio UK Volunteer, please contact us on Histio@HistioUK.org.

Our objectives:
The relief of sickness and preservation of good health among patients affected by histiocytic diseases their families and carers, in particular but not exclusively by:

(i) the promotion and furtherance of scientific research into the physiology and pathology of histiocytes and the aetiology of histiocytocytic diseases, the useful results of which will be disseminated for the public benefit;

(ii) the development of more accurate means of diagnosis, improved protocols for management of patients and ultimately measures for prevention of histiocytic diseases;

(iii) the provision and dissemination of information, education and knowledge in support of patients and families affected by the disease to include the medical professions and general public;

Histiocytosis UK has an independent Scientific Review Board to help it decide how to fund research projects, our Scientific Review Board utilises a peer review system to review applications and recommend the best application to the Histio UK Trustee Board for funding. In 2014 the Histio UK Board of Trustees appointed Professor Matthew Collin BM, BCh, DPhil, MRCP, FRCPath as Chairperson of the SRB, with Professor Peter Beverley MBBS, DSc, FmedSci., rotating to the position of Vice-Chairperson of the SRB.

Your support is vital to ensure that we can continue to deliver our Research and Information Programs. Thank you.

Make a donation
This site uses cookies: Find out more.